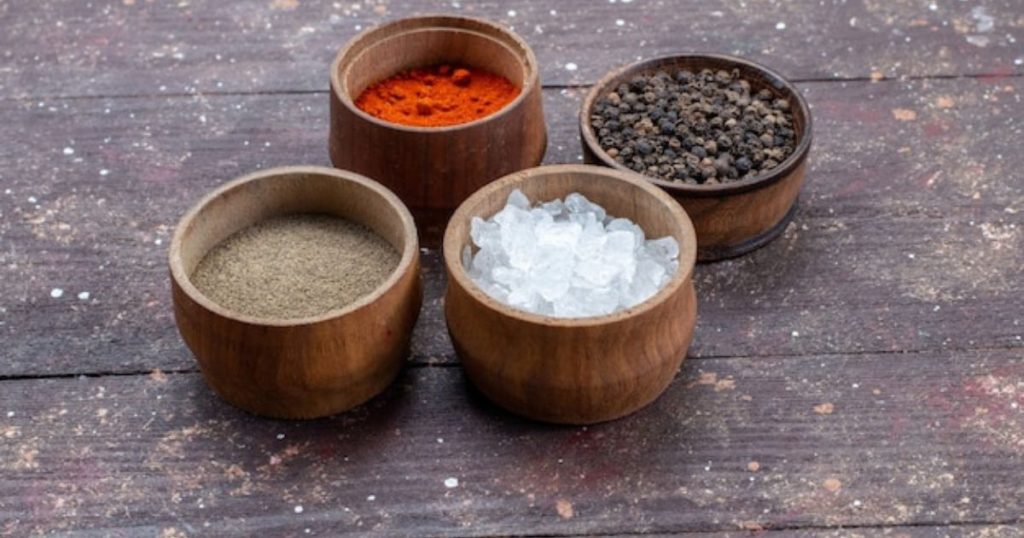 Salt and pepper are kitchen essentials that have graced dinner tables for centuries. While black pepper is considered a classic spice, many people debate whether salt should also be classified as one. If you, too, are curious about the difference, you’ve come to the right place.

In this article, we’ll explore the distinction between salt vs. spices. Whether you’re a seasoned cook or just starting to experiment with different seasonings, we’ve got you covered. So, is salt a spice? Let’s begin.

Is salt a spice?

Is Salt considered a Spice?

Among cooks, the terms salt, spice, and seasonings are frequently interchanged. The use of salt and spices to enhance the flavor of food is common. The majority of people perceive salt to be a spice and have been preparing dishes without taking into account the differences between the two.

In order to answer “is salt considered a spice,” one must first understand the fundamental differences between spices and salts and know their definitions as well.

Think about your meals without any spices. Is that even possible? Spices have a place in the cuisines of every culture. But in order to respond to the question “is salt a spice”, one must be aware of what is meant by the term.

Any dried plant portion beside the leaves is a spice. Take note that no plant’s leaves are used to make spices. It’s because herbs generally refer to leaves of green plants used for the same reason.

The components of a plant that isn’t green and leafy, like the dry roots, twigs, barks, and seeds are called spices.

Spices are ingredients made from organic plants which are used to flavor and aromatize food. Spices have different antibacterial qualities, meaning they can destroy or stop the growth of microorganisms.

Spices are commonly used to store food for this reason. Although they don’t degrade or have an expiry date, spices do lose flavor over time. Keeping spices in a dry, cool environment extends their shelf life. Because of this, it is advised to store them in airtight jars.

Common Spices and their uses:

Although it is frequently used as a flavoring, salt is not a spice. Instead, it is an organic mineral. It is largely a sodium and chloride chemical that is extracted from mines and dried seawater.

It originally fits into the seasoning family. The actual flavor of your meal remains the same even after adding salt. It just enhances the flavor of other ingredients and gives meals a salty flavor. Other foods taste better and are refined when salt is added. Additionally, the salt powder is used with other herbs and in recipe mixes.

In addition to giving food flavor, salt gives your body the sodium it needs. The required amount of sodium is conveniently found in salt. But remember that too much salt might be bad for you.

We have discussed the differences between salts and spices and now we know that “salt is not a spice” but a mineral.

By briefly describing the purposes of salt, the difference between salts and spices can be made more evident. Although salt has been utilized for a long time as a flavoring and preservation agent, it serves a variety of other roles in food as well.

Salt is a powerful moisture-absorbing mineral. When salt is applied to food for preservation, it absorbs moisture and keeps microorganisms at bay.

Additionally, brine, which is another method of food preservation, is produced when a large amount of salt and water are combined.

The most apparent use of salt is to improve food flavor. In contrast to spices, which are primarily utilized for seasoning, salt possesses unique flavoring properties. When used sparingly on some foods, salt not only imparts a “salty” flavor but also amplifies sweetness.

In addition, salt counterbalances bitterness. Salt can help to mask the bitter flavor of some veggies, including olives.

3. Improves the texture of food:

Although most people don’t think about it, salt is frequently used to give food texture. For instance, big salt crystals give the meat a texture when added at the proper moment. It softens the meat and aids in the juice release.

Further, salt is also employed in the manufacturing of cheese and processed foods like ham and sausage.

Salt is consumed in almost every house. Salt is used in every home. In fact, a kitchen is incomplete without salt. Not only this, salt plays a vital role in our health, hence the quality there is no kitchen without salt and that is the reason why the production of top-quality salt is so important.

There are many leading salt brands like Standard Salts that are working tirelessly on manufacturing top-quality salt for every type of use. It is the only brand in Pakistan that uses a highly modern salt processing plant for the purification and runs a strong quality check on it.

We hope that you must’ve gotten an answer to whether or not salt is a spice; Salt is NOT a spice. Rather, it’s a mineral that has a wide range of culinary uses. This sets it apart from the spices.

Here are some of the frequently asked questions related to salt and spices. Feel free to drop more in the comments, we’ll answer them here.

Q: Is salt a spice, seasoning, or something else?

Answer: Salt is actually a mineral, not a spice. Therefore, like spices and herbs, it does not lose its taste over time. Salt has long played an important role in world trade and cuisine, and the word “salt” is important in our language and literature. No kitchen can do best without salt.

Q: Why is there garlic salt but not other spice salts?

Answer: There are other salts, such as celery salt and onion salt, but you can make any kind of seasoned salt you want just by adding salt and spices in the proportions you want. Some people make their own salt and pepper mixes.

Q: What is the basic difference between spices and condiments?

Spices are added during cooking to add flavor or color. (Cardamom, star anise, bay leaves, etc.) They should not be eaten raw, but they add flavor and color when cooked.

We are one of the leading Manufacturers, Suppliers & Exporters of Himalayan Salt Products in Pakistan.
PrevPreviousHimalayan Rock Salt Suppliers In Pakistan
NextHimalayan Pink Salt Nutrition: Does it Have Health Benefits?Next